The most reliable plane, simply known as the “Flying Tough Guy”!

Sometimes from warships, sometime through the freezing cold mountains, and sometimes in the skies above the jungle!

No major modifications were made from the A-1H to the A-1J, and both the wing folding mechanisms and arresting hook remained unchanged.
Changes made for the Air Force type mainly impacted the antennas, with the UHF blade antenna being added to the rear of AN/ARN-6 radio loop compass antenna and the FM622 whip antenna behind the cockpit. There were also Skyraiders that had a VHF/FM antenna (commonly called the “towel hanger”) on the fuselage underside immediately behind the air brake, and a blade antenna just in front of the anti-collision light (ACL) on the tip of the vertical stabilizer.Also, taking the unpaved runways of Southeast Asia into account, a larger wheel was installed on the rear landing gear assembly, and the main landing gear assemblies were converted into single-piece types.
Additional features included the taxiing lights on the underside tips of both right and left main wings, as well as the “Yankee Extraction System” that was missing from earlier model Skyraiders. Of course, all of these features are fully recreated for the SWS A-1J.
When telling of the Vietnam War, this aircraft simply cannot be overlooked, with its heroic figure painted in the three colors of the characteristic SEA scheme. We certainly hope that you will recreate it atop your table through the SWS kit. 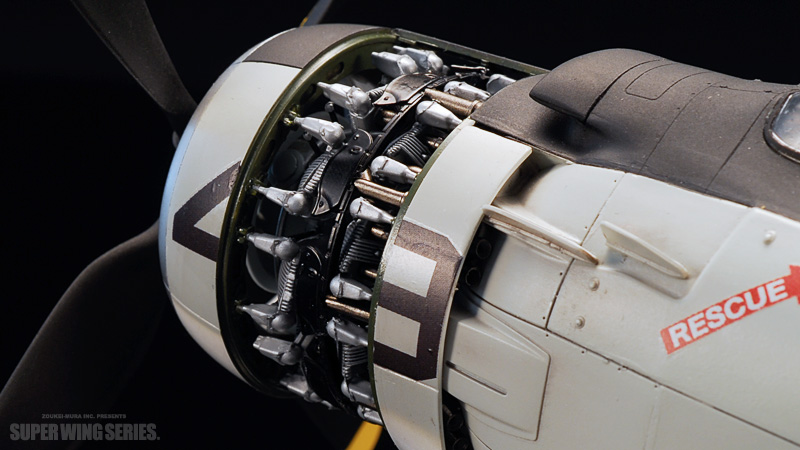 The organically intertwined exhaust pipes. Look at the R3350 engine with the superb double-row of 18 cylinders! If you work on the detailed piping with your own hands, it will surely be a museum level model. You can choose an open or closed position for both the engine cowling and the front shutter. Be sure not to miss the offset attachment of the vertical tail to the fuselage for its tremendous engine torque! 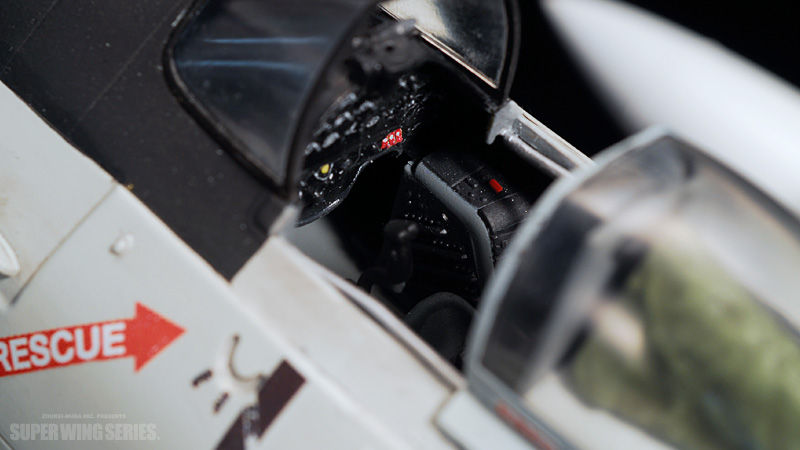 It is said that a bubble shaped canopy is hard to express, but it is recreated here accurately! Its attractive shape, which is the signature of US airplanes, gives a sharp look to this model’s entire silhouette. Of course, you can choose from a pilot seat with or without seat belts and in addition, we will include a normal seat and an ejection seat. Please enjoy expressing the variations of this airplane which was active for a long time in the US Air Force and Navy. 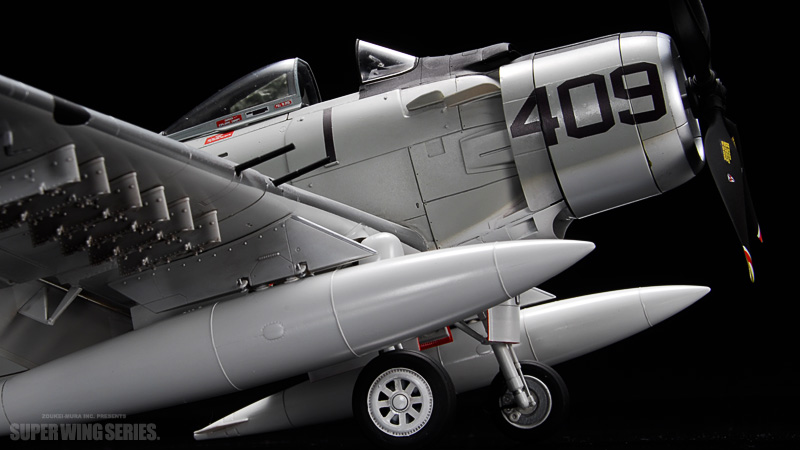 Look at the accuracy of the M3/20mm cannon and bullet belt! You can also make the most of the carrier-based bomber’s attractiveness by hanging the separate sale item “US Aircraft Weapons” onto the main wing pylons! This set includes various types of the warheads which were used for a long time in the Navy from the early period of the SKYRAIDER’ deployment. You can enjoy different equipment according to the operation. 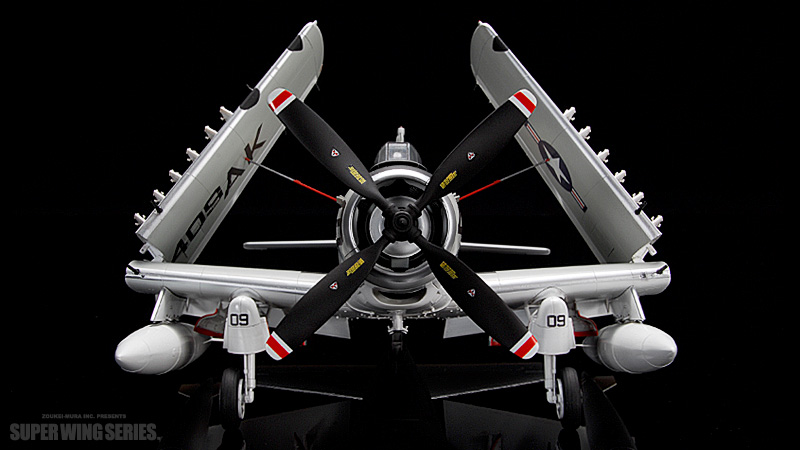 Look at the accurately recreated Aero Products’ propeller and its pitch! Did you notice that there is a line on the back of the propeller? We recreated it accurately to the actual airplane based on the revelations from our research. We studied not only drawings and references, but we also did actual airplane research. Please enjoy the SWS’s signature deep authenticity. 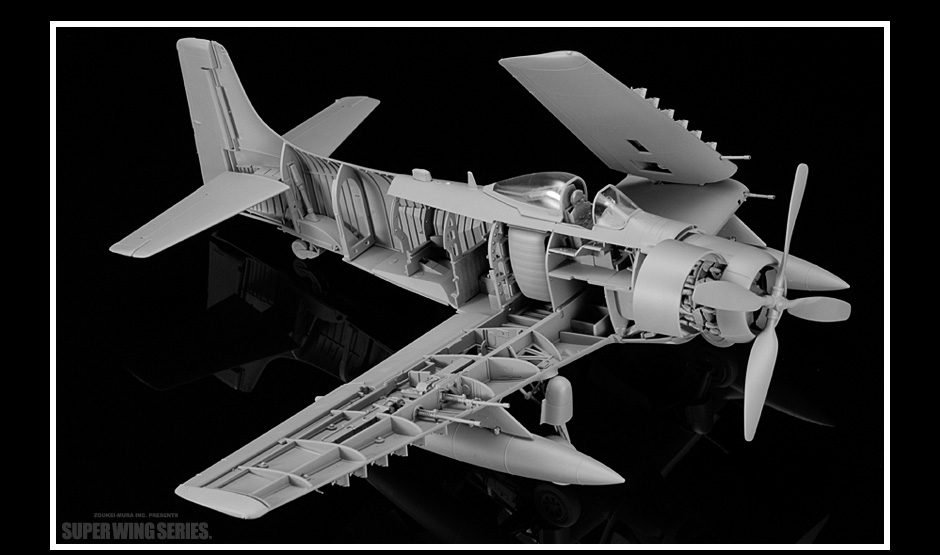 This is what SWS is all about! Be sure to check out its amazing recreation of the internal structure! We recreated not only the engine and the cockpit, but also the main wing spars, which have a complicated movable system, the ribs beneath the external panels, the rigid bulkhead with wireless communication devices and such included, the fuel tanks in the fuselage, etc. We expressed the internal structure fully based on what we could learn from researching both the actual airplane and from references! You can simulate the feeling of the actual airplane’s assemble with this model. 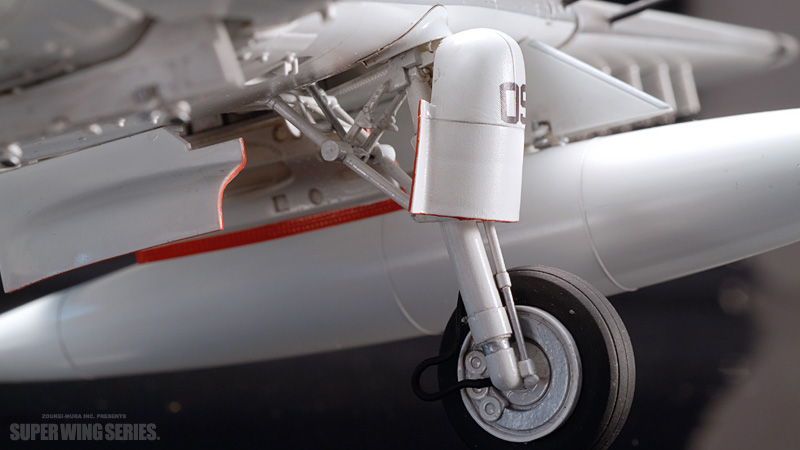 The main landing gear, which absorbs the shock from the landing and supports the heavy, huge airplane, as well as its folding system are the must-see points of this carrier-based bomber. For its thick and reliable main landing gear struts, you can choose its suspending condition from an armament loaded type or a non-loaded type. The main wing spars and ribs inside of the main wing can be seen through the wheel well. Please be satisfied with SWS’s signature accuracy in its expression, which you may have never experienced. 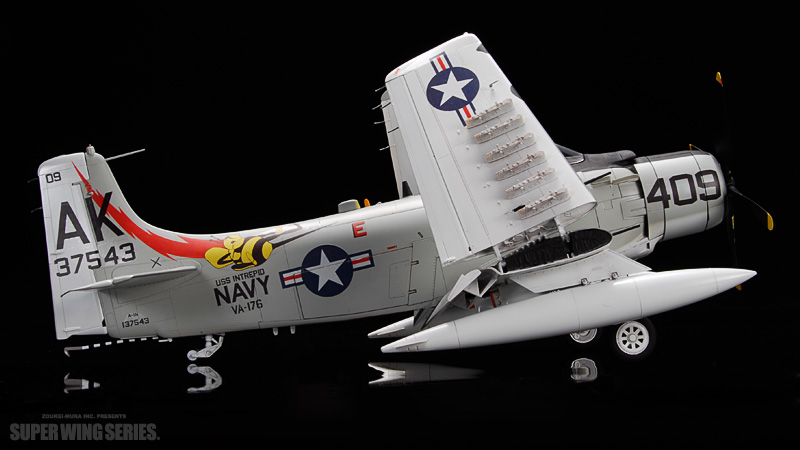 Anything can be carried! The main wing folding system is recreated accurately with a new mechanism. It moves smoothly in the same angle as the actual airplane without spoiling the beauty of the wings. The pylons, the signature of the SKYRAIDER which was proud to have the biggest payload as a reciprocated engine fighter, were marvelously recreated even to the detail of anti-vibration steadies. Additional tanks (external fuel tanks) can be loaded on to the default kit.